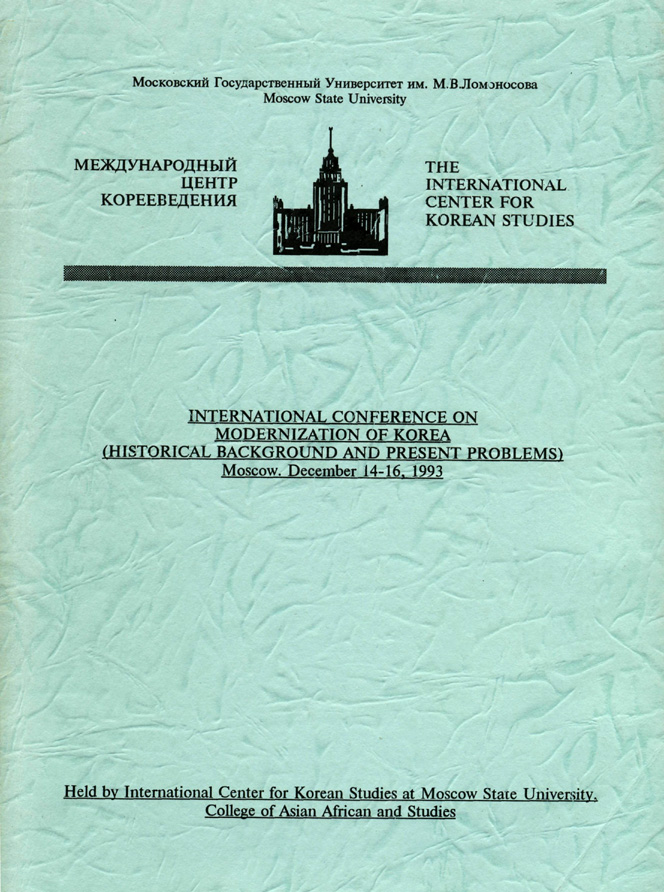 According to the long-wave theory formulated by well-known Russian economist Nikolay Kondratyev, the fifth wave of scientific and technical progress which began in the mid-1980s and which is based on the development of microelectronics, mechatronics, biotechnology, genetic engineering, new materials, new types of energy and superconductivity could well revolutionize the productive forces of modern society, for it is much deeper than any of the earlier ones. The STR and the application of its results in the economy is now becoming one of the basic factors of intensive development of the productive forces.

Qualitative improvement of the scientific and technical potential as one of the most active elements of the reproduction process has in the past few years been the main factor behind the high rates of economic development in South Korea.

At the initial stage in the development of its high-tech industries South Korea adopted the strategy of borrowing foreign experience and technologies: virtually all the high technology industries in this country used Western know-how and were equipped with foreign technology.

The strategy of borrowing, which enables a country to absorb and use the best there is in the world of science and technology, is increasingly combined with a strategy of developing a country"s own scientific and technical potential, the results, for all practical purposes, are achieved through a concentration of resources along definite STR lines, with a marked emphasis on the development of current and long-term programs for R&D, their material and personnel backup, system of organization and management of research, and provision of information.

The state has an active role to play in stimulating scientific and technical progress in South Korea. In the early 1980s, there was a basic change in the nature of state regulation of the economy, when the main emphasis was laid on optimizing the economic system, and making it more flexible and perspective to STR achievements.

State agencies determined the basic lines of the restructuring of the economy, and produced the long-term programs for economic development. Thus, the Ministry for Trade and Industry has presented a five-year plan for the development of science-intensive industries from 1990 to 1994, its main aim being to make South Korea less dependent on foreign technology and also to make its export products more competitive.

This is to take up $38.8 billion, of which $16.4 billion is to go into R&D to develop new technology in such areas as microelectronics, mechatronics, aerospace, biotechnology, fine chemistry, laser technology, optical equipment and new materials. South Korea"s R&D appropriations are expected to rise from 2.5% of GDP in 1992 to 5% by 2000.

To attain these objectives, the South Korean government intends to give local companies easy credits for up to 10 years totaling up to $3.7 billion. Besides, companies engaged in turning out science-intensive export products are to be given additional tax privileges. The program for developing science-intensive industries is to be implemented with market methods of regulation including credit, fiscal and other mechanism for stimulating scientific and technical progress.

Let us stress that in organizing R&D projects South Korea has made use of Japanese methods, which are characterized by a blending of efforts of the state, academic and private organizations, with the latter having a basic role to play, especially in applying the results.

In the early 1980s, only a handful of South Korea companies had their own R&D organizations: by the early 1990s, however, their number had gone up to 400. In that period, R&D outlays by industrial corporations multiplied over and over again to nearly $4 billion, with the largest appropriations going into the development of scientific and technical facilities characteristic for South Korean trans-national corporations.

Let us note that the leading South Korean companies in other Asian NICs, have a fairly high proportion of R&D outlays in new gross investments, which in 1989 totaled for Lucky-Goldstar 26.7%, Hyundai 21.1%, Samsung 19.4%, and Daewoo, 15.4%. The most significant investment in R&D was concentrated on the development of science-intensive products in such areas as electronics, electrical engineering, automobile making, petrochemistry, aerospace, robotics, and the promotion of riskobusiness.

The leading corporations have been setting up new research centers, joint ventures and their own research branches in major scientific centers abroad. Thus, Hyundai, for the purpose of speeding up the introduction at its own enterprises of modern technology in making electronic equipment has opened its subsidiary in the USA. With the same end in view, Lucky-Goldstar set up in the United States a joint venture with ITT for the making of electronic components.

Modern technopolises are being organized in South Korea itself as well as in Japan. The largest technopolis, known as Dae Dook, is located near Taejon, a hundred or so miles south of Seoul, and it is the South Korean counterpart of the Japanese technopolis in Tsukuba, whose basic R&D projects are related to the production of high-tech goods, new technologies and materials. In is also engaged in basic research.

Three of South Korea"s leading TNCs, namely Samsung Lucky-Goldstar and Hyundai pooled efforts to develop their own technology for making 4-megabyte chips which are now made elsewhere only by the Japanese companies Hitachi and Toshiba.

These electronic components are now technically the most sophisticated ones on the market. They are being ever more widely used in supercomputers, workstations and communication equipment, and may eventually be extensively applied in high-resolution TV. To develop this chip, the South Korea corporation were given a government subsidy of $120 million, and intended to start mass production at 100,000 a month in November, 1990.

Specialists believe that by 1994 South Korean companies will be able to make electronic components for a new generation of computers with a 64-megabyte memory, and by the end of the century, one with a gigabyte memory.

Let us stress that faster progress in any one of the industries is never isolated, but entails progress in several others, producing a technological chain. But with electronization, quantity tends to add up to a new quality. Once they built up a modern electronic-component base, South Korean companies were in a position to develop every sphere of electronics and the electrotechnical industry.

The production of electronics and electrotechnical items in South Korea is expected to grow up from $22 billion in 1988 to $55 billion in 1993, carrying the country to the third place in the world after the United States and Japan.

If its highly ambitious program for developing its scientific and technical potential succeeds, South Korea could by the end of the century join the countries with the most modern types of industrial technology. Supercomputers, aerospace facilities, design of the most sophisticated electronic equipment and development of materials with new properties from the basis of South Korea"s economy, turning it into one of the most developed countries of the modern world.

For all their conspicuous successes in promoting science-intensive industries, South Korea is still on the periphery of the industrialized Western countries conducting most of the fundamental research which in the long run determines the future progress of mankind. At the same time, we believe that South Korea could well make breakthroughs along various lines of world scientific and technical progress.

Western specialists put a fairly high value on South Korea competitive potentialities on the world market of science-intensive products. Thus, 70% of representatives of major US corporations who were polled believe that by 2000 exporters of high-tech goods from South Korea and other Asian NICs could well be the main competitors for US makers of similar products.

Japanese researchers at the Nikko research center polled the presidents of the leading companies on the prospects for the economic and technological development of South Korea. Most of them believe that by the year of 2000 the scientific and technical level of South Korea will rise considerably, but that the lag behind Japan will still be there. At the same time, they hold that by the end of the century, South Korea will outstrip Japan in some, though not the foremost, spheres of scientific progress.